I’ve searched the forum and can see previous posts on this, but no resolutions. It’s driving me a bit mad constantly asking for fonts to download. Safari doesn’t ask me to download fonts, why should GS?

Can this be resolved please?

I’ve also noticed it has been happening more often lately.

It occurs because there is a Live view of a listing showing. Not sure why eBay wants to send CJK fonts (which is what is being downloaded) for non-Asian browsers, but it does.

It also seems to pause the Launch Control listing or re-listing interface until a response is received, which is annoying and can lead to some serious misfires for planned launches with delays. (It does not seem to affect the Scheduler launches)

It seems like if there were a way to avoid showing a Live view automatically after a listing is launched, it would not happen.

Good point. I actually don’t like that it goes to live view after listings start. If that could be disabled it might just solve it.

This new Preferences has been added to v8.4… 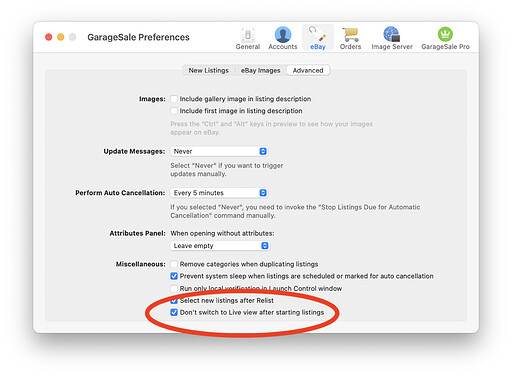 Brilliant… will give it a go!

Sorry, but there doesn’t seem to be a way for us to solve this. It’s all in between eBay’s webpage and the macOS component that GarageSale uses for displaying web pages.

I got the note a couple times but haven’t seen it in months.

It has definitely returned since I updated to Monterey (possibly a coincidence), but also since eBay’s been having all this trouble with their distributed database (since late August).