Have just discovered the “Pre flight” in GS7… was looking for GS6’s 'Verify" function. 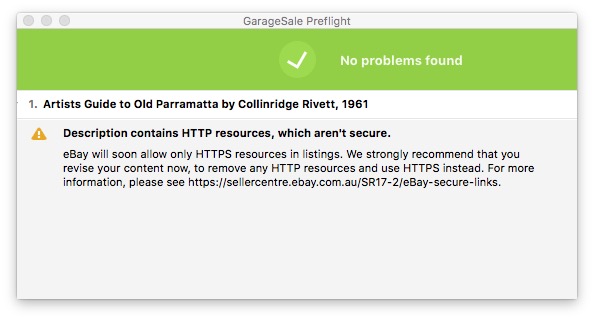 it says “no problems found”, but then flags a problem with the HTTP to HTTPS problems…

I would think that it it foundscmthing wrong, such as the HTTPS problem then it should report this as a problem, but be that as it may…

Can we please add a “Fix” button to this preflight that would invoke the “Repair Image” thingy.
regards, Sandy

That warning is returned by eBay, so we cannot easily change the text to make it specific for GarageSale. Doing so would be a bigger change, maybe something we can do for GarageSale 8.

But you are right, we should change the text to something else and use a different color. You are still able to list with warnings, though.

did not know that you could still list the item… which is rather pointless, due to the problems about this HTTPS controversy and why it is all changing… but realise that you program find now error, and then ebay says an problem.

and the “fix” button.?
Sandy

I suppose Ilja intended it would be a good future for GS 8, so we won’t see it in a few time… although I would find it really useful too…

Eehh yes, we need to be veeeery patient …