Hi,
I have been using GarageSale (ver. 5, 6, 7, 8, 9) since 2016, and I have never had any problems with the “refresh eBay tokens” whenever I need to.
Recently, I did two things! Firstly, I updated from GS8 to GS9 on my MacBook Pro (2011, running Catalina Ver 10.15.7) back in June. After the upgrades, everything’s fine and I do not need to refresh tokens for my eBay accounts.
Then, I bought a new MacBook Pro (2017, running Monterey ver12.4), and I cloned the disk data (everything) and migrated the data/applications to the new MacBook Pro, including GarageSale ver.9. At first, GS9 runs without any problem on the new machine. However, a few days later, GS9 on new machine just stopped communicating with eBay. I know this because none of the order info/new messages are coming through anymore, and listings are all stuck at “generating preview” stage. So I went to refresh the account tokens and get a prompt window (refer to screenshot 1 attached). I appears that the eBay certificate is no longer valid on my new MacBook. I don’t know why and just leave it there.
So I ended up using the GS9 on my old MacBook Pro, and things still works as before. However, a few days later, the GS9 on the old MacBook pro got the exact same problem, and when trying to refresh tokens, it prompt the same warning window that “eBay server is invalid”.

I have looked through this forums and found similar topics. Here’s what I have done so far trying to fix this.

Despite everything I tried, I still got the same warning when trying to add new account/refresh tokens for existing account. The only difference now is that whenever I open GS9 application on my new MacBook Pro, I got a prompt up window (as shown in screenshot 2), telling me that “eBay Account needs re-authorisation”.

This is driving me crazy as I cannot do anything in GS9. For the past week, I started editing listings on eBay website instead… and that has been extremely inefficient. So total disaster without GS! Please help me get back to GS! 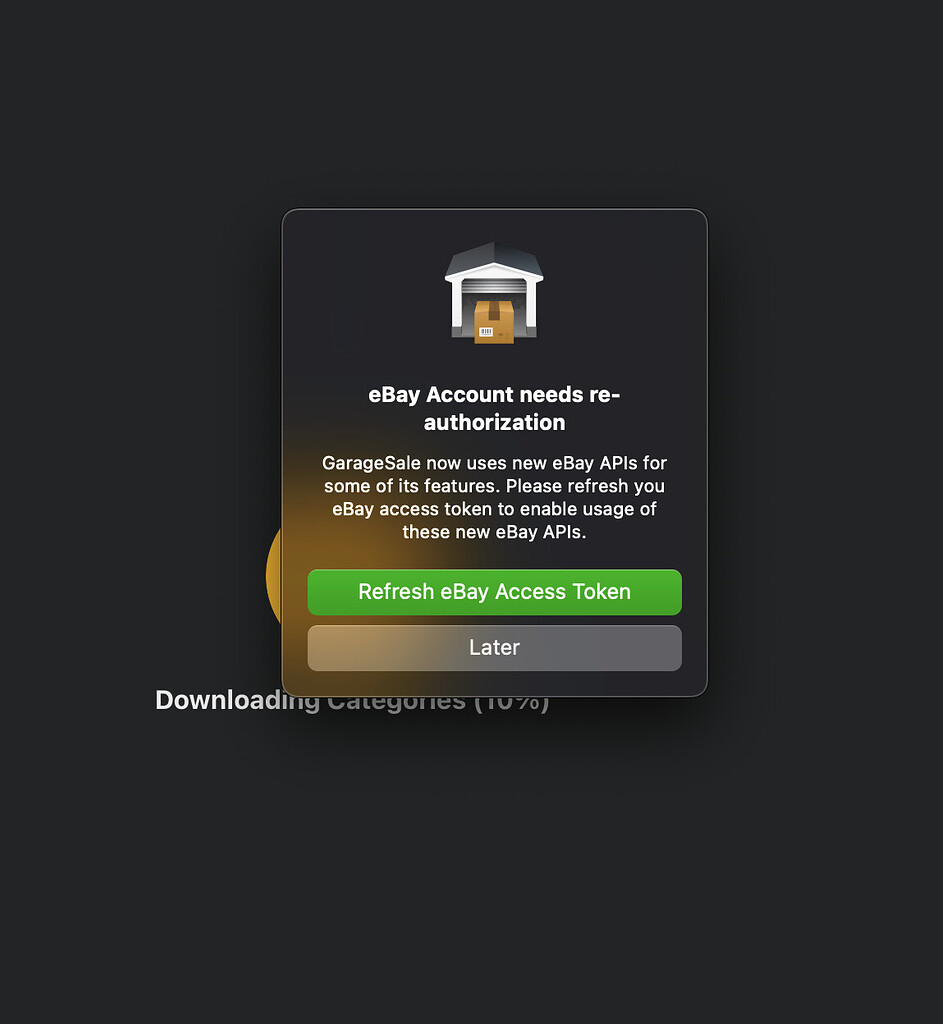 • Are you maybe using a proxy server, VPN or a network or “AntiVirus” tool, e.g. “Avast Antivirus Web Shield”?
• Do you have any Safari extensions installed?
• Any special router settings? Restarting the router is worth a try, too.
• Can you temporarily disable 2-Factor-Authentification on eBay?

Hi Kristian,
Thanks for the suggestions.
I found the problem by using a third Mac, which has a clean Mac OSX to start with. It turns out that the GS9 problem is caused by a VPN app that was not being uninstalled properly on the old machine.
Regards,
Lee