I have a major problem with the latest version of Garage Sale. It is on a one year old Mac running the latest OS in the UK.

In the last week I have listed over 40 items (as a private individual) on eBay using GS7. I was so impressed with the new interface and the ease with which it could all be done. Pretty much all the items were listed aiming at overseas markets. Then a couple of days ago I got a yellow warning triangle to say the “Listing is not eligible for cross-border trade”.

I could not understand this as I had signed the supplementary agreement with eBay specifically for a facility to trade overseas. There was nothing controversial about the items which I was listing and they compared to other things I had listed for an overseas market, so I became suspicious and annoyed. I clicked for it to be uploaded anyway but it prompted me to look at the item through the eBay web interface and, sure enough, it was there but not listed for other than domestic shipping.

I also got a message from someone who had seen one of my items but he was not able to bid on it (he was in Holland). This prompted a review of all my listings. I discovered that nearly all of the items for which I had set up overseas shipping and set the enhanced overseas visibility option in GS7 were posted on eBay with neither. This included the ones which had been through their cycle and were either unsold or sold. Notably one item I was fairly sure I would sell for a good price in the US sold in the UK for half that price. Examining the details on the eBay web site revealed that it was down for domestic shipping only, despite my selection overseas shipping in GS7.

I have been through all my listings on eBay and have had to change them all, to correct this error and I have not used GS7 since. How can I, if it is not to be trusted? Am I the only one this has been happening to?

I would continue to use it, albeit begrudgingly, if there was a way to re-sync GS7 to the eBay account, so that new listings or revisions on the eBay account, set up on the website, would reflect in the GS7 application but this does not happen and presumably isn’t possible.

I am so annoyed about this. What a waste of time and money.

Do you still have a listing in GarageSale with the overseas shipping intact, which you’d previously listed on eBay as described.

If so, can you please export that listing so we can open an issue with eBay support to see what’s going on?

I have altered all current listings but it would be simple enough for me to set up an new listing in GS7 to run the test if you can tell me exactly what you want me to do.

For example, I know I am sure to be posting something in the next 24 hrs or so which I want to appear on overseas sites and to have enhanced visibility. If I list it through GS7 and then check on the eBay site to see if it has failed to register as available overseas or if the enhancement has not registered I can report back to you and I presume I will be able to find how to export a listing in GS7 for that purpose?

I listed this item with international shipping and with the International Visibility enhancement.

The exported listing is at the foot of this page. Sorry, it is a bit of a monster! I also have screenshots of the differing conditions.

Please let me know as soon as I can go to change the settings on the eBay site. I want it to get full visibility as soon as possible.

Hi Ilja. I have replied by email and have therein attached the information you asked for. Here attached are the relevant screenshots to which I referred in the email. 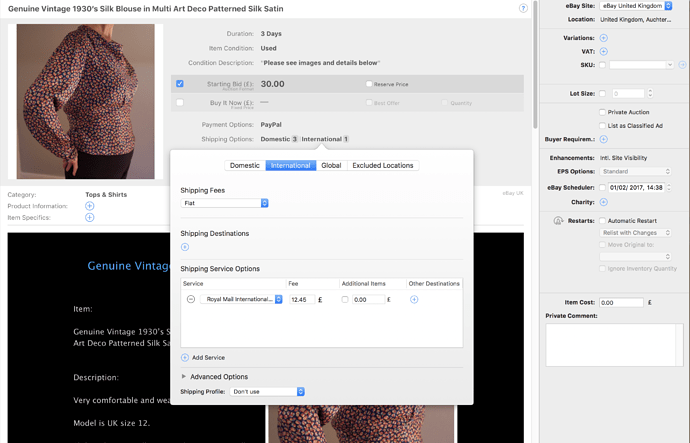 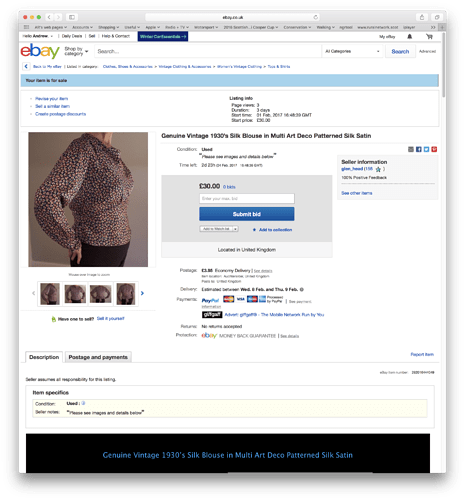 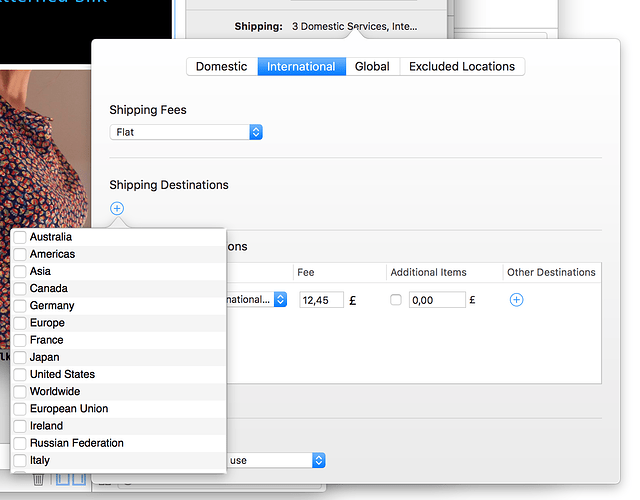