I’ve been having some instability issues with GarageSale Pro running on our old High Sierra desktop mini, and decided to try to move the database according to the FAQ instructions.

So I installed and ran GS 8.3.5 on the new Big Sur desktop, just to make sure I had my Pro subscription in place and all, plus I figured it would be a good way to create a “landing folder” in the ~/Library/Containers/GarageSale directory.

Then I dragged the folder ~/Library/Containers/com.iwascoding.garagesale8 from High Sierra machine to the appropriate location on the new machine.

When it was done (40 Gb over LAN), I launched GS on the new machine but got this dialog: 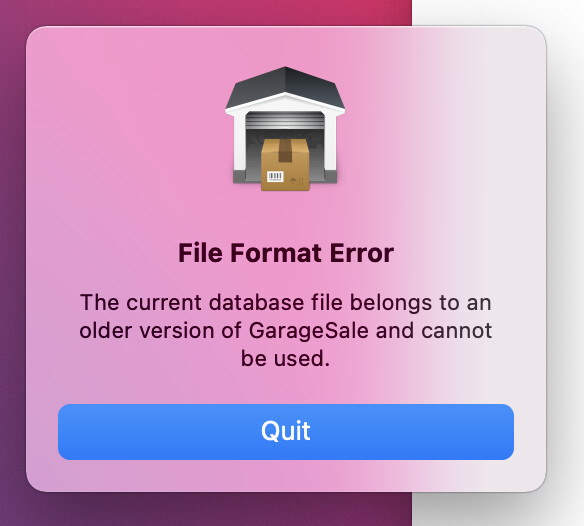 I will be happy to hear the simple advice you might have for getting this to work. It’s not an emergency quite, but ever since 8.3.5 was released I have been seeing crashes in GS on the older OS.

clarification: The old computer can’t be updated past High Sierra “honestly”, but I am considering trying BigSurPatcher… but not when money is on the line

I figured it would be a good way to create a “landing folder” in the ~/Library/Containers/GarageSale directory.

You didn’t put the “com.iwascoding.garagesale8” folder into that “GarageSale” folder, did you?

No, I moved and changed the name of the moved folder from

as the FAQ implied. Replacing the existing (mostly empty) folder of that name created by the app on the target computer. Is that not correct?

Did you already try to NOT rename the transferred “com.iwascoding.garagesale8” folder?

On your Big Sur system just rename (or remove) the folders
com.iwascoding.garagesale8
and
GarageSale
in ~/Library/Containers/
if existing there.

Have just tried that.

Yes, the moved folder was automatically given the expected view name GarageSale by Big Sur magic folder daemons, but no it did not change the outcome. Same dialog box.

I would be willing to start a new database of listings and export/import those, but the data tables of orders and transactions are still very important to me.

Quick question to help me help you debug: on the High Sierra machine, do you think I could move the folder out of Containers as a test, and then drop it back in to see if 8.3.5 emits the same message there? I am concerned to try this because if I become locked out there too, 40Gb of actually useful database will be lost.

Can I ask: what is the programmatic check to validate the “version” of the files? Does this dialog box appear only when there is an explicit version mentioned which is not 8.3.5 (for example), or does it appear as a default whenever there is any problem reading the files?

Unfortunately, I am bit clueless here. Maybe @ilja has an idea?

I think you could give GarageSale’s built-in repair mechanism a try maybe:

Yeah, I’m stumped. I thought for a bit about the chance that there was another set of prefs in another account on the target Mac, and deleted those as well. No luck.

Also have done auto-repair and no luck.

I’ve never used GS sync before. Are all listings (including completed and deleted ones) synced between machines? Are all orders synced as well? (aha, I rtfm)

If so, I suppose I might be able to sneak a sync between the two machines for as long as the app runs on the old one?

As I mentioned, the whole point here is that I have been experiencing crashes on the older (High Sierra) machine. Yes, I think we can assume some problem has arisen because of this, but do you think it somehow propagate via sync to the new machine as well?

I was able to halt all listings that had no bids, export them, and re-launch them from the new machine (with some exceptions that aren’t surprises).

Is there any way for me to move the old Orders info from the old machine to the new one? This is stuff going back to 2015, and I like to have that on hand.

GarageSale uses a hidden file property to identify the version of the database format. Most likely, that version was not properly transferred when copying your database over the network.

Also, we recently made the check more strict, as we’ve run into users who simply dropped their GarageSale 7 database into GarageSale 8’s application folder, causing all sorts of havoc.

Have you tried zipping your GarageSale container folder before sending it over the network to your other Mac? Maybe that preserves the extended attribute?

Out of curiosity, what does show up if you paste the line below into the Terminal applications on both of you Mac, old and new?

Just FYI, this is what mine shows:

produces this on the old Mac (still was OK running 8.3.5 except for occasional crashes)

and on the new Big Sur machine (fresh install of GS 8.3.5, imported items from other machine manually from LAN):

Should those be different?

Version 3 is exactly how it should be. If you are still getting the error message when launching GarageSale, could you send me your GarageSale.leveldb somehow.

Oh sorry you missed something: I stopped trying to move the database over the LAN after a few days of failure.

I recreated it manually by exporting all listings from the old machine and importing them to the new one.

It was not my preference, but it was better than suffering the crashes on the old machine any longer.

I don’t have a broken db any more to report on.

Still open question: How do I transfer the Orders table to the new one, please? I do not have record of the 2015-2020 entries, otherwise.

If you move the GarageSale.leveldb file from the old Mac to the new Mac once again for testing, does xattr still show “3” for the “com.iwascoding.garagesale7.database-version” after the transfer on the new Mac?

@ilja it does not!

I dragged a new copy to the desktop (via Screen Sharing, which I used originally), and

So yes, I suspect that was it.

I definitely cannot go back to trying to move the old database to get the Orders table, since I have already stopped and restarted 3000+ listings on eBay.

How might I be able to get that [the old Orders table] imported into my new installation?

Here is what I would try:

Also, have you tried enabling “File Sharing” on your new Mac. This should be easiest way to copy your files over, in case they are on the same network.

That’s how we work here. There are four desktop machines in the house, and we both work from laptops for most tasks

As to export/import cycle: Will the status of the exported/imported listings be retained as “running”? I don’t want to risk losing the association with the currently running listings on eBay. Is that retained?