Trouble using GS while it is actively re-starting listings

This has been going on since the beginning of GS7 but I’m just writing about it now (I’m currently using 7.0.6b3):

When a listing re-starts, the screen seems to refresh/update and interrupts whatever you are actively doing. If you are in the middle of typing the description for a new template, it interrupts you and you have to re-select the template you were working on. When I have hundreds of listings automatically restarting throughout the day, all this refreshing and pinwheeling while it restarts brings my productivity on that day to a sloooooow, frustrating crawl.

Can anything be done about the interruption when listings start/restart and the page refreshes? This should go on in the background without constantly hanging and interrupting the work flow.

Hello @etb222 ,
I had many troubles with the auto-restart feature but never had this specific issue, listings are usually relisted in background and I don’t have to waste time waiting GS ends relisting. Concerning the speed, are you sure you are using a SSD? I worked for a long time with a HD and now I am using a new computer with SSD I am again a happy person

. Anyway, excepting this issue I never saw, there are so many other matters with this feature… I was near to open a new thread so I take this to point out a new problem. If you use GS on 2 computers, each one relists twice the listing… and this is very problematic, first because they are lost between other hundreds correctly relisted, second because I cannot catch and close them from eBay since they would be relisted, third because I cannot see through GS the last listings that have been relisted… I don’t know what to do except checking one by one… I think a sort of “register” of relisting in GS would be very useful…

I assume you are using the auto-relist feature? Or do you manually start the relists?

@ilja I suppose auto-restart. But cancel what I said in the previous message, I am having the same problem right in this moment!! Actually GS is relisting simultaneously 190 listing, in the meanwhile I tried to manually stop another listing (not between these)… well, GS did not stop it until all listing were relisted…

If you don’t want to be interrupted by the site effect from auto-delisting, I suggest you turn off the automatic downloading of orders in the Orders preferences and only trigger the process manually from the menu bar.

If you don’t want to be interrupted by the site effect from auto-delisting, I suggest you turn off the automatic downloading of orders in the Orders preferences and only trigger the process manually from the menu bar

Does it stop also relisting? To be honest I don’t think (not sure) the problem comes from the order downloading, they are not so many every time like the listings relisted…

Does it stop also relisting? To be honest I don’t think (not sure) the problem comes from the order downloading, they are not so many every time like the listings relisted…

Yes, order downloading triggers the auto-relist mechanism. So if you turn auto-downloading off, no auto-relist will occur until your invoke the “download orders” or “update all listings” commands manually.

Ah I see, but what about all other orders? In this way GS does not download any other order? If a listing ends, does GS stop it also if that feature is disabled? Maybe a sort of “background activity” as @etb222 said would solve this problem…

Where is this command? Is it the wheel icon on top bar (4th from right)?

In this way GS does not download any other order?

Yes, you’d need to start the order download manually. You can also increase the time interval to one hour or two, so the process doesn’t interfere with your working as often.

If a listing ends, does GS stop it also if that feature is disabled?

I don’t get this question.

Where is this command? Is it the wheel icon on top bar (4th from right)? 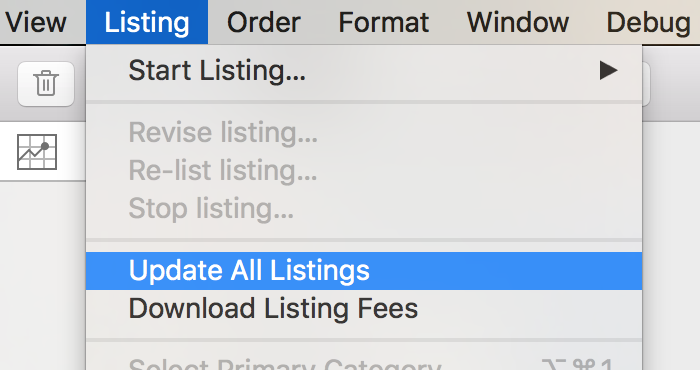 Ah thank you, now I see… concerning the second question, if also other orders are not downloaded I suppose that if a listing ends on eBay GS does not know it is ended until I “update all listings” and stays blue until I refresh (and then become grey or green depending on its new status), am I wrong? I mean in this way GS would not be synched in real time with eBay… and also sold or expired items would not be…

I have hundreds of auction listings timed to end a few minutes apart throughout the day, so I prefer to keep things automated. I think it actually happens whether a listing auto-restarts, or is manually re-started. I’ll double check next time I need to re-list something and let you know.

Often times I have multiple listings re-starting at the same time, and I basically have to just sit there and wait while it does it. Since I need my listings evenly spaced out in time, I have no choice but to have things re-starting all the time throughout the day.

Maybe there is nothing to do about it right now, and it’s not the end of the world, but if a solution ever comes up that would be nice. I just want to be able to keep typing on whatever template I’m working on without interruption.