The fourth beta version of GarageSale 7.0.10 is available for you to download from the URL below, or the built-in updater if you are already running a previous beta version.

What’s new in this beta version

Thanks for using GarageSale,
Ilja on behalf of the iwascoding team

This beta version is not showing relisted items. They are shown on eBay as relisted but they are remaining dark grey and showing up as not relisted on the GS file. All of the grey are running currently on ebay but show up as ended on GS. Automatic restart was checked in the box to restart auction but now is not running in GS. 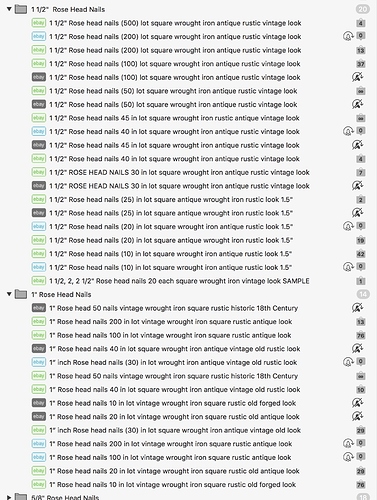 @rlmartin there must be some issue since I already had such a problem after updating to the new version… one listing was disappeared: GarageSale 7.0.10 Released . I restarted, then I noticed that the active one in GS was still missing! And I found an expired one as those you see. Please switch to “advanced” and move mouse over the red icon under relistig: does it say that it was not relisted because one identical was still active? If so, search for that listing in GS, do you find something like in this video ?

P.S. In the video you see (when I do the search) an expired listing. It was not the one with the “error” in the advanced tab. I restarted it manually and then find one that was showing the not-restarted icon as those you have, with a red icon in advanced tab… @ilja this is not a good Christmas gift!!!

It is spreading to all the items I have that are marked for relisting as those items end. However, 5 have relisted since the first batch went wrong. I don’t see any differences in those listings as to why they relisted fine.

The relist issue seems to have resolved itself on the next round of relists. I will keep appraised of the next round when they work through the system.